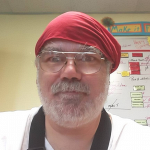 I have been a fan of the Left Behind series since 2000. I personally want to see all of the books be transformed into movies, particularly "Glorious Appearing", which is my favorite. For the book "Glorious Appearing", I created two homemade soundtrack albums, featuring songs such as "Days Of Elijah" and "The Lion Of Judah" by Robin Mark, "All Creation Sings" by AD, "Awesome God" by Michael W. Smith from his Worship album, "I Can Only Imagine" by MercyMe, "Shout To The Lord" by Darlene Zschech, and "Jesus, We Crown You With Praise" by the Brooklyn Tabernacle Choir. (By the way, I overlaid a segment of "I Can Only Imagine" over the part in the Dramatic Audio version of "Glorious Appearing" where Jesus calls Rayford Steele to meet him.)

One thing I like about the Left Behind series is its humor. While I don't think the end-times is a laughing matter, I do think one can possibly see the lighter side of having to endure such an awful time in potential future history, such as the Tribulation Force members seeing Leon Fortunato in his wildly resplendent outfits as the High Reverend Father of Carpathianism.

The songs featured on my non-commercial homemade GLORIOUS APPEARING soundtrack albums are:

New Songs For The Future Edition:
1. Even So, Come -- Passion featuring Chris Tomlin

This was created by using various panels featuring Nicolae Carpathia from the LEFT BEHIND graphic novels. I made it look like he's speaking on television. 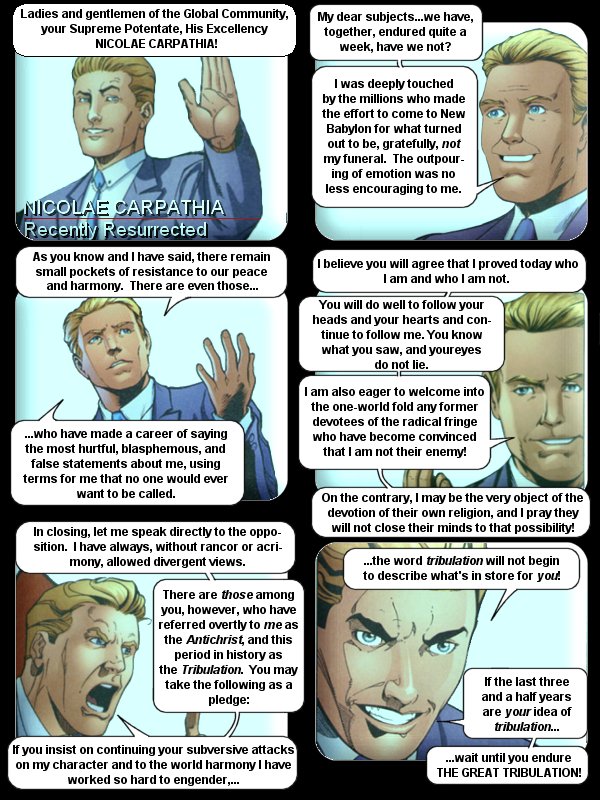 An image created for a fanfiction story idea of mine called LEFT BEHIND: GLOBAL JUSTICE (Left Behind in the DC Universe), where Superman and Batman take on Nicolae Carpathia wearing the tech armor of the villain Monarch: 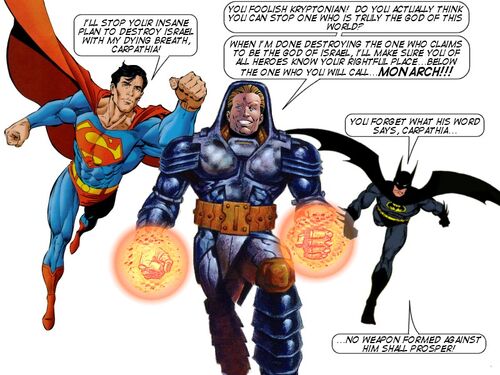 Retrieved from "https://leftbehind.fandom.com/wiki/User:VicGeorge2K9?oldid=18943"
Community content is available under CC-BY-SA unless otherwise noted.