The Tribulation is the prophesied seven-year period in which Believers along with the Jews will be persecuted by the forces of the Antichrist. In the Left Behind books, this period started within a month after the Rapture with the signing of the seven-year agreement between the Global Community and Israel for protection in exchange for licensing use of the synthetic fertilizer formula created by Dr. Chaim Rosenzweig. It ended 1260 days after the desecration of the Temple with the glorious appearing of Jesus Christ. It is during this period that the Seal Judgments, the Trumpet Judgments, and the Bowl Judgments take place, along with the "abomination of desolation" and the "mark of the beast". This period is also called Daniel's 70th Week from the book of Daniel as well as "the time of Jacob's trouble" from the book of Jeremiah.

Timing Of Events In The Tribulation 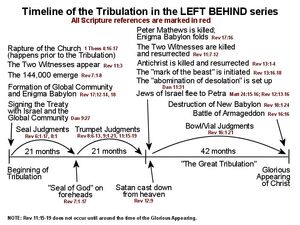 While Tim LaHaye and Jerry B. Jenkins, the authors of the Left Behind books, present their ideas of what may happen during the Tribulation period and when, the actual timing of these events should the Tribulation take place according to the futurist interpretation of Revelation is at best uncertain and highly debated among Bible students. Some believe that the first 3 1/2 years will be a period of peace between the first Seal Judgment and the second, and the second 3 1/2 years will be when all the other judgments, from the second Seal Judgment to the final Bowl Judgment, will occur. Some even believe that the Trumpet Judgments and the Bowl Judgments happen concurrently with each other, given what happens with the final judgments.

Community content is available under CC-BY-SA unless otherwise noted.
Advertisement