The Temple was an essential part of worshipping God for the children of Israel in the Bible. Prior to the Temple, they made sacrifices and offerings in the Tabernacle that God showed Moses how to make and assemble in the wilderness. As with the Tabernacle, the Temple had an inner shrine called the Holy of Holies in which only the high priest can enter bearing the blood of a clean animal without blemish to atone for the people's sins as well as for his own—a yearly occurrence that would point the way to Jesus Christ making the perfect atonement for all sins with His own blood shed on the cross. 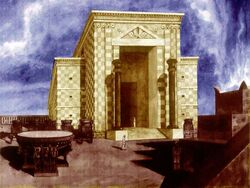 When the Ark of the Covenant was brought to Jerusalem, King David wanted to make a permanent house for God to dwell in. God told David that his son Solomon would be the one to build the house for Him. After David's death, King Solomon had the first Temple built in Jerusalem, which took seven years to build, and the glory of God came in and filled the house on the day of its inauguration. God promised His people that as long as they were obedient and faithful unto Him, He would remain dwelling in the Temple forever. Over time, though, the people of Israel departed from God and served various idols. The corruption got to the point where God's presence (the Shekinah glory) left the Temple, and by the eleventh year of King Zedekiah's reign in Jerusalem the city was destroyed, most of the people were killed or deported by the Babylonians, and the Temple was destroyed.

Around the time of King Cyrus of Persia, a group of Jews returned from exile to begin building the next Temple by the commandment of the king, but their work was halted by reports to King Artaxerxes about the Jewish people. However, stirred on by the prophets Haggai and Zechariah, they resumed work on the Temple until it was finished. This Temple remained standing into the days of Jesus Christ's first coming, when King Herod the Great had it renovated. As Jesus had prophesied in His Olivet Discourse, this Temple would be destroyed within that generation by the Roman Empire troops under general Titus in 70 A.D. (Prior to this, at the time of Jesus' death on the cross, the curtain that separated the Holy Place from the Holy of Holies was torn in two from top to bottom, indicating that Jesus' sacrifice for all people's sins was sufficient and that access to God was now available to all people through Jesus.) At this present day in Israel there are plans for a third Temple to be built, but whether those plans will come to fruition is as yet uncertain.

There were two Temples that were built for the Jews to worship God in in Jerusalem in the Left Behind books. The first Temple was built and finished within 18 months after the start of the Tribulation in the book Tribulation Force. Eli and Moishe denounced this Temple as a "Temple of rejection" as the Jews had built it apart from the true Messiah, Jesus Christ. As they had prophesied, it was desecrated by Nicolae Carpathia after his resurrection when he committed the "abomination of desolation" by sacrificing a pig in the Holy of Holies and splashing its blood upon the altar in Desecration, demanding that all future sacrifices made in the Temple are to be made to him instead of for him after declaring himself to be God. This Temple was destroyed by God prior to the beginning of the Millennial Kingdom in Kingdom Come and replaced by a Temple that resembles its descriptions in the book of Ezekiel. That Temple was later destroyed at the end of the Millennium along with the old earth, when the "new heavens and new earth" came into being and the New Jerusalem came down from heaven, where the Lord Almighty and the Lamb are its temple.

In Left Behind: The Movie, the Temple was planned to be built right next to the Dome Of The Rock on the Temple Mount, according to the plans that Chaim Rosenzweig had revealed to Buck Williams prior to their meeting with Nicolae Carpathia at the United Nations building.

Retrieved from "https://leftbehind.fandom.com/wiki/Temple?oldid=25325"
Community content is available under CC-BY-SA unless otherwise noted.